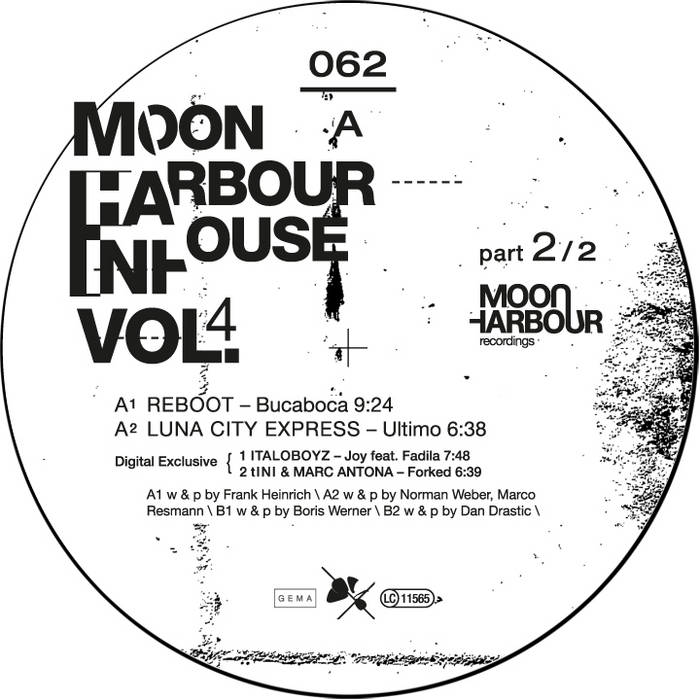 Three years have passed since the last Moon Harbour Inhouse Compilation came out. Now “Moon Harbour Inhouse Vol.4” is on its way. In accordance with the tried and tested concept, this release also showcases the work of current Moon Harbour artists. In addition to exclusive tracks by Matthias Tanzmann, Luna City Express, Dan Drastic, Ekkohaus, Martinez, Italoboyz, Andy Catana and Blind Minded, special guests like Reboot, Guido Schneider, Boris Werner and tINI & Marc Antona are also represented on this compilation. The list of artists clearly demonstrates that Moon Harbour has developed into a label with international scope and appeal. This sampler was compiled and mixed by Dan Drastic, who has been part of Moon Harbour’s artist roster for more than seven years and recently released his “Noodle Stories EP” on our label. He regularly hosts the Moon Harbour Nights at the Leipzig club Distillery and is one of the most active Moon Harbour deejays, together with Matthias Tanzmann and Luna City Express.

The musical styles on “Moon Harbour Inhouse Vol. 4” range from the deep house of Luna City Express and Ekkohaus to the reduced groovy tech house á la tINI & Marc Antona, Andy Catana and Boris Werner and the floor fillers by Reboot and Dan Drastic. In this sense the selection of tracks mirrors the current breadth of styles represented by the label in its 12th year.

Since the third Inhouse Compilation, a lot has happened at Moon Harbour. In addition to the releases of the albums “Hello From Planet Earth” by Luna City Express (2009) and “Paradigm Shift” by Martinez (2010), the tenth anniversary of the label was celebrated with gusto in 2010 complete with the compilation and club tour, “Ten Years Of Moon Harbour”. The year 2010 also marked the birth of the monthly Moon Harbour Radio Show. Luna City Express and Dan Drastic have been taking turns producing this show, which has already had more than 25 editions.

The year 2011 marked another special occasion: our sister label Cargo Edition celebrated its fifth anniversary with the compilation “Five Years Of Cargo Edition”. In the summer of 2011, Moon Harbour released the compilation CD “Circoloco @ DC10 Ibiza - The Next Level”, mixed by Matthias Tanzmann and Davide Squillace. This year started off with yet another important step: the launch of Moon Harbour Digital. So far this new digital platform has seen releases by Arado & Marco Faraone, ONNO and Nil By Mouth.
To celebrate the release of “Moon Harbour Inhouse Vol.4”, there will be numerous record release showcases.